Our generous visitors helped us raise $1000 for Rainforest Rescue.

Rainforests are under constant threats from development and climate change. Rainforests support about half of all land-based species of plants and animals on Earth. Structurally complex, rainforests are essential to both animals and humans. Many rainforests are disappearing with 65,000 hectares cleared or significantly de-graded every single day! We are losing the rich diversity of the rainforests. 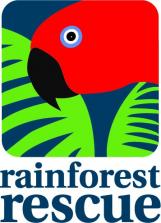 We choose to support Rainforest Rescue also because in turn we can support the Southern Cassowary and its habitat.

The southern Cassowary is currently listed as ‘Endangered’ under the EPBC act. It is estimated that the number of cassowaries living in the wild has declined by over 50% since 1988. The major causes of decline are results of human activity. Current threats to cassowaries include; habitat loss, motor vehicles, dog attacks, disease and feral pigs.

Another key project run by Rainforest Rescue is ‘Save The Cassowary’. It is not a single-species conservation campaign but the Southern Cassowary has been chosen as an ambassador species to represent the tropical rainforest ecosystems of Far North Queensland.

Cassowaries play a vital role in rainforest regeneration. Through eating the fruit and excreting the seeds of rainforest plants, the cassowary plays a vital role in rainforest regeneration. Due to the role they play in maintaining the balance and diversity of rainforest vegetation, their extinction could have devastating effects for other rainforest animals. Many rainforest plants and trees are entirely dependent upon the Southern Cassowary for seed dispersal. Without the cassowary performing this important task, the balance of Queensland’s tropical rainforests would be disrupted with potentially devastating consequences. The Southern Cassowary is currently listed as ‘Endangered’ under the EPBC act. It is estimated that the number of cassowaries living in the wild has declined by over 50% since 1988.