Captive breeding programs are an important role that parks and zoos can play in the protection of future populations of endangered wildlife.

They maintain insurance populations for species facing extinction in the wild and breed animals for re-introduction to the wild to re-establish wild populations.

They also support the documentation of husbandry techniques, knowledge and research.

Population Management Program (species that are of regional/global significance due to their threat status or strategic importance to Australasian collections):

Conservation Program (species that have a documented role in a formal recovery effort. Typically managed to a high level of genetic and demographic rigor):

Bush Stone Curlew (Burhinus grallarius) is a widespread native species found across most of Australia.

Here in the south-west they have seen a drastic reduction in population with one of the only sustainable groups found in the Dryandra Woodland near Narrogin.

In May 2012 Caversham Wildlife Park joined forces with Department of Parks and Wildlife and the Perth Zoo to help the eerie night call of the curlew become a more common sound heard in the south-west. 12 birds were taken to Wadderin Sanctuary in Narembeen and released into the wild. This was considered the first time curlews had been released back into the wild in WA.

In August 2013 the program was bought much closer to home. Whiteman Park had joined in on the action with the Bush Thick-knee considered a prime candidate for their Woodland Reserve. 6 birds were initially released into a soft release aviary within the reserve to get used to their new home and became wild. Once released the birds were able to move around Whiteman Park at their leisure with one pair finding a comfy home to raise 2 chicks behind the Village Café in 2014. A huge success for the program.

August 2013 also saw 6 of our CWP birds and 2 birds bred at Perth Zoo take a plane trip to Adelaide and became the first WA raised chicks to be released in SA and NSW with the birds taking part in AWC (Australian Wildlife Conservancy) Bush Thick-knee program and being released into both Yookamurra and Scotia sanctuaries to boost the released genetics.

With the original Whiteman Park birds doing extremely well in October and November of 2014, another 14 birds were released into the park to bolster numbers and hopefully see some more breeding action.

Bush Stone Curlews (also commonly known as Thick-knee's) are classified as Least Concern (IUCN Red List); they are common in northern Australia. However in Western Australian and New South Wales, there has been significant decline, mainly due to habitat loss and predation by foxes and cats.

In July 2016, three penguins joined us from Perth Zoo as part of a joint effort with Department of Parks and Wildlife, to create a larger insurance population of WA province Little Penguin.

There are between 17-19 penguin species recognized today depending on what literature is referenced. The Australian Little Penguin was in a 2015 study found to be genetically different to the New Zealand population and to have a different “accent” which could see them given full species status if the study is accepted by the larger scientific community. On top of this, the West Coast population differs from those found on the East coast of Australia and further more from those in NZ; they are on average heavier and tend to bred at a different time of the year.

This makes it vitally important that a larger captive insurance population is created in case the wild numbers drop to a point that they need our help.

The Australian Little Penguin (Eudyptula minor novaehollandiae) has had many names since it was first discovered in 1718 including Fairy Penguin and Blue Penguin. Their scientific name translates to “smaller good little diver” and highlights the fact that they are the smallest penguin species alive today. Standing at no more than 43cm and weighing on average 1.2kg they are drastically overshadowed by their Antarctic cousins the Emperor Penguin that can stand up to 122cm and weigh as much as 45kg.

The Little Penguins (Eudyptula minor) natural range covers most of Southern Australia from Rockingham here in WA to the NSW/QLD border in the east as well as the Tasmanian coast and most of New Zealand.

Natural predators for Little Penguins include seals, sharks, orcas and sea-eagles whilst on land they can also be taken by dingoes, large monitors and rats. The largest threat to Little Penguins today is predation by introduced foxes, cats and dogs whilst in NZ they are also threatened by stoats.

Classified by the IUCN as Least Concern the Little Penguin population is estimated to number around 1 million worldwide. The largest colony in WA is considered to be that found on Penguin Island near Rockingham and numbers around 1000 birds. 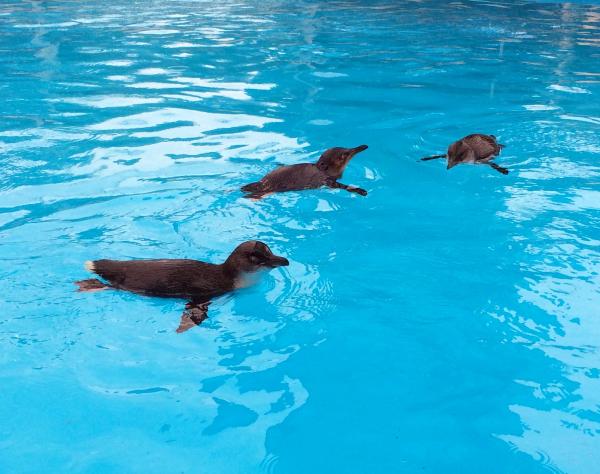 The Tasmanian Devil is listed as endangered and populations are declining due to the Devil Facial Tumour Disease (DFTD).

DFTD is a fatal disease first recognised in wild Devils during the 1990’s.  The contagious cancer is characterised by large tumours around the face and neck. The disease makes it difficult for devils to eat and compete for food, with most Devils dying within a few months of tumours first appearing.

Any Tasmanian Devils housed at Caversham Wildlife Park are from the program, and play the role of ambassador animals; educating our guests on the plight of their wild relatives. 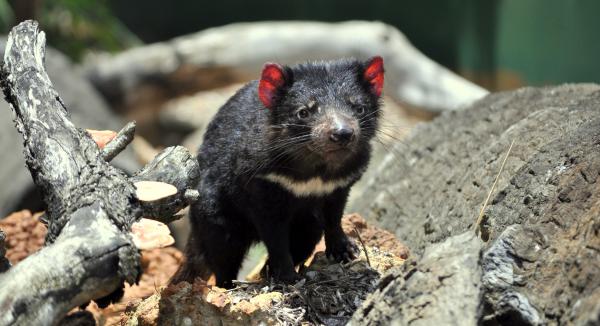