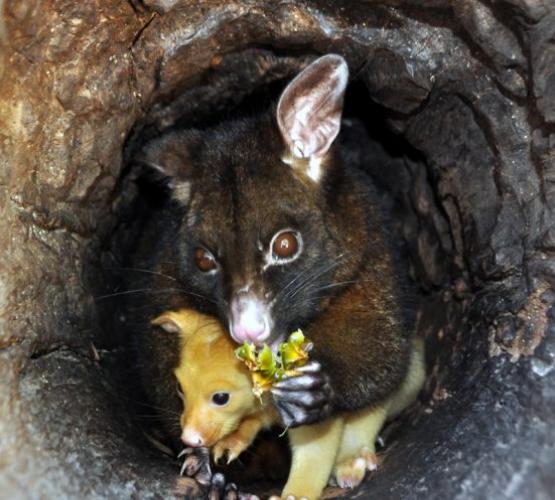 The common brushtail possum can adapt to numerous kinds of vegetation. It prefers Eucalyptus leaves but will also eat flowers, shoots, fruits and seeds.

Common brushtail possum can be found in a variety of habitats, such as semiarid areas, forests and even urban areas.

Brush-tail Possums are the largest of all possums, weighing up to 4.5 kilograms. They are a nocturnal (night-time active), and arboreal (live in trees) animal that belongs to the marsupial mammal family. Their tail is semi-prehensile, without fur on the underside, enabling them to grip with their tail. On average they live about 12 years; becoming sexually mature at two years of age. Brush-tail Possums will have 1 joey at a time, who will stay in the pouch for about 6 months. They are found over most of Australia, including Tasmania.  On the mainland of Australia, possums are generally brown, black and grey. In Tasmania, some of the population are a naturally occurring golden colour due to genetic isolation. The golden colour is a result of a recessive gene that is less likely to be suppressed due to the closed gene pool in Tasmania.  Brush-tail Possums were introduced to New Zealand in the 19th century; they are now considered an agricultural and conservation pest in New Zealand. Brush-tail Possums are omnivorous; feeding mainly on leaves/foliage, fruit & berries, occasionally mice, insects, lizards and baby birds. They forage in the trees, and also on the ground.