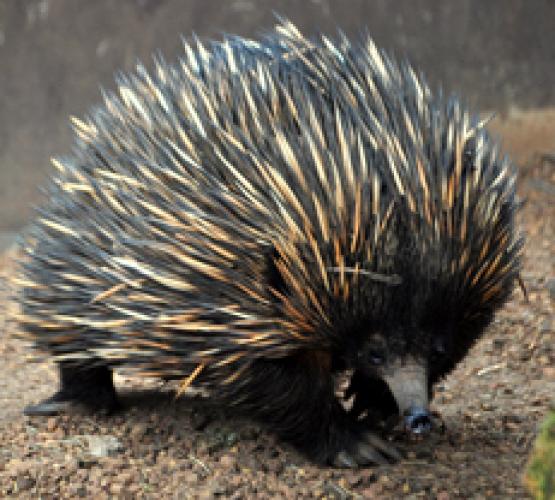 Adults can weigh up to 5-7 kilograms

They feed mainly on ants and termites. After digging into a nest with their forepaws, they extend their long sticky tongue into the chambers of the nest; the insects are drawn to the sticky saliva. The Echidna is toothless.

Short Beaked Echidnas are found throughout Australia, and have no particular habitat requirements; they are found in regions of winter snow to dry arid deserts.

Echidnas are covered in spines, which act as protection. When threatened, the Echidna will curl into a ball or dig into soft soil to protect its vulnerable underbelly. The Echidna is a Monotreme; an egg laying mammal. About 2 weeks after mating, the female lays a single soft-shelled egg, directly into the pouch on her belly. The egg hatches after about 10 days. Whilst in the pouch, the young suckles milk that is secreted from numerous pores of the paired mammary glands. The young, which is called a puggle, is first seen when it is about a year of age; it is covered in short spines and weighs less than 2 kilos.