Our generous visitors helped us raise $470 for the Gilbert's Potoroo Action Group.

The Gilbert's Potoroo was not the intended target of a trapping survey being conducted in Albany’s Two People's Bay back in 1994. The species thought extinct for over 120 years was hanging on by a thread in the long sunburnt shrublands on the slopes of Mt Gardner.

November 2001 saw a group of local Albany residents band together and form the Gilbert's Potoroo Action Group (or GPAG as they affectionately call themselves), a not for profit volunteer group dedicated to saving the Gilbert's Potoroo from extinction. The main aim of the group is to raise the public awareness on the plight of the species as well as fundraising much needed money to help in the species recovery and offering volunteer assistance were needed during conservation work.

The Gilbert's Potoroo is considered Australia's most Endangered Marsupial.

When first rediscovered there was only around 40 individuals remaining. The IUCN Red List reassessed the species in 2016 and left them as Critically Endangered. They are now found in 2 nature reserves and on one island to the east of Albany with the population currently around 140 animals.

The money raised by GPAG goes directly into helping protect the Gilbert's Potoroo being used to help monitor the wild population with radio tracking or trapping as well as helping to find other suitable sites to translocate animals to, to help ensure the long term survival of the species. 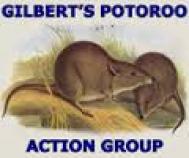 You can learn more here http://www.potoroo.org/