Our generous visitors helped us raise $580 for Manfred at Wombat Hilton.

Manfred Heide started raising Wombats in 1976 with his late wife Helen on their property in the hills above Adelaide in South Australia. Almost 40 years later they have helped over 270 wombats, from orphan joeys to adults injured in car strikes. 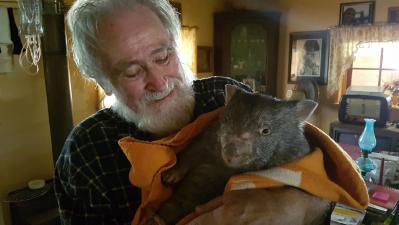 Manfred currently houses a number of permanent residents on his hills property including Echidnas, Bettongs and Kangaroos but of course Wombats are his main focus and have use of over 100m of artificial burrow systems around the property, including a den under the office of his aptly named “Wombat Hilton”.

In 1985 Manfred joined forces with DEWNR (Department of Environment, Water and Natural Resources in South Australia) and bought The Wombat Program to life. The program was created to help co-ordinate carers and offer support by the use of a program  co-ordinator of which Manfred took the wheel. The program is funded almost entirely by donation and the money is used to supply the bottles, teats and milk to raise the joeys. The program also helps find homes for the joeys once they are weaned. Since the program started, hundreds of orphans have found homes across Australia in Wildlife Parks, Zoos and Education Centres with these organisations required to donate to the program in order to acquire animals, in turn helping buy supplies for the next season’s joeys.

In 1989 Caversham Wildlife Park received our first Southern Hairy-nosed Wombats from Manfred, a weaned young pair who were aptly named “Fred” and “Marian”. This pair became a very important part of the park producing a number of joeys including the one and only “Big Bubs”.

Then in September of 2008 two CWP staff ventured across the Nullarbor to meet Manfred and his wife in person and bring back with us “Oodnadatta” or as we all know her now “Natta”. “Neil” wasn’t too far behind joining the team in April 2009.

Three other wombats in CWP’s current collection have taken the plane trip from the “Hilton” over recent years with “Harry Jnr” and “Chloe” the Common Wombats coming over in June 2011 and Southern Hairy-nose “Matilda” joining us in August 2012.Most recently, we welcomed "Judie", "Roger" and "Asha" late 2017.

We purchase the wombats we receive from Wombat Hilton, which in turn helps to pay for the supplies for the next season's joeys!

Sometimes the wild is romanticised as a wonderful place for animals to be, but the sad truth is that it is often incredibly unsafe, as is the case for wombats. We are therefore proud to have the opportunity to home many rescue wombats, and raise awareness of this unique marsupial.